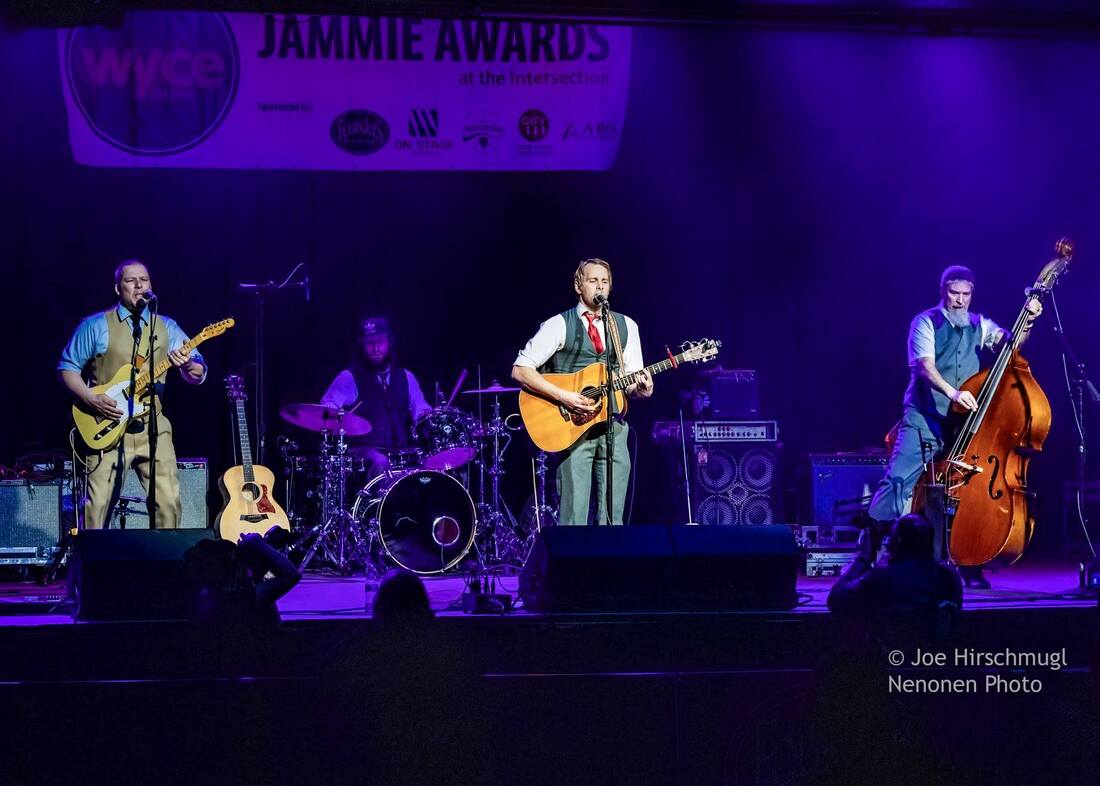 Music is felt, not heard. Live music is an exchange of emotions from musician to audience and back again. It is something that cannot be harnessed with a silver disk or mp3. Roosevelt Diggs brings the wide influences of four individuals into one painted landscape. They focus their obsession for music into this live music setting…..for true Roosevelt Diggs, experience it live…
An energetic blend of Folk, Country, Blues, Bluegrass, and Rock-n-Roll.
It is not only heart but blood that unites the core of Roosevelt Diggs. At its base: Two brothers, Levi and Logan Duddles, who have spent a lifetime creating and writing music together. With the addition of the musical backbone of Jon Shears on the upright bass and John Ellsworth on percussion, they transformed from two brothers picking on stringed instruments to a band with a fire inside.
Musically, Roosevelt Diggs finds itself in the long-standing Michigan tradition of acoustic-based music. Blending Folk, Country, Bluegrass, Blues, Rockabilly, and Rock and Roll into a melting pot of true Americana, Roosevelt Diggs proudly carries on this tradition and brings a genuine approach to acoustic music.
Since its beginning in 2008, Roosevelt Diggs has made its way around Michigan performing in some of the finest concert venues, breweries, and festivals. Whether it’s a high-energy evening in your favorite brewery, a Wednesday afternoon music in the park, or the opening set for a sold-out nationally touring act, their music was felt and embraced by audiences of all ages and musical preferences.
Roosevelt Diggs released their third album, “Better Days” in November of 2018. Better Days displays an evident growth in songwriting and arrangements from their 2014 release, “Songs From The Shed”. The album captures a band with over a decade playing music together recording in one of the area’s finest studios, Third Coast Recording. Better Days harnesses the energy and flow from their live shows along with the shine of a superb studio album. Better Days was awarded a 2019 WYCE “Jammie” for the Listener’s Choice Album Of The Year.
Tickets · $10
www.eventbrite.com/e/roosevelt-diggs-w-zac-bunce-tickets-308948341807