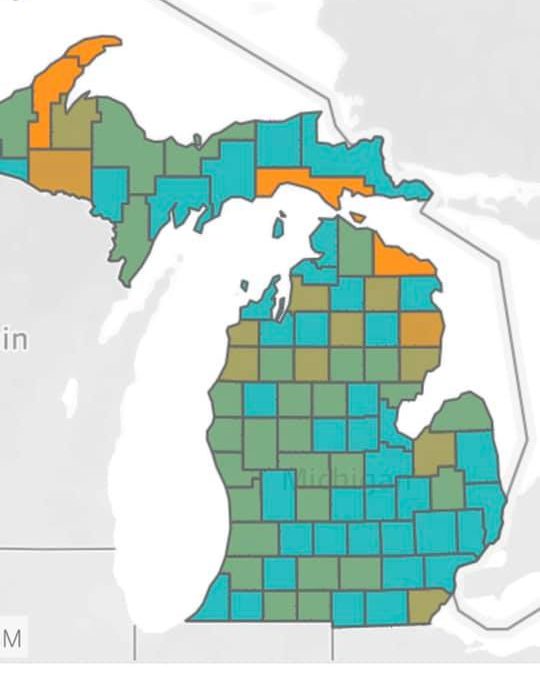 Hello again everyone.
We are cutting out early in the office most days due to the reduction in our volume. So I had time to post again.
This picture of the state that I posted is really interesting. You can find an updated version on Unacast.com. It’s pretty damn creepy, though. It is a graded by county map showing accumulated tracking of cell phone movements. That means they are tracking how much everyone is moving from their baseline location. Then taking that amount of movement and grading it to define how well people are sticking to the stay at home ordered. That is some serious Big Brother creepy stuff, man.
But it does create a fascinating map.
We are doing well as a state —they gave Michigan an ‘A’. Wexford didn’t get the highest grade though TC did. I would argue though that That Might have more to do with how far people have to go to work, those that are still going to work. some people drive quite always to come in. Either way we are doing well, at least as far as this goes.
What’s interesting to me is the grades for Detroit. That’s where the vast majority of cases, and almost all the deaths, have been in Michigan.
The way I interpret that is people are still gathering in small groups but just not traveling very far to do it. And passing it on.
So Stay at home. Don’t meet with your friends. No play dates for kids. Stay 6 feet away from people you don’t live with and sterilize your hands often. It’s That simple. Easy to say hard to do. This crap is really easy to pass on. I think that this cell phone thing is showing that transmission is still possible even likely unless that is followed very strictly. It’s just crazy much ‘they’ can gather from the phones.

New York is going to be a complete disaster. Worse than Italy I fear. Half the country’s current cases are in NYC. I kinda feel guilty sitting here with a cup of coffee after seeing just 10 pts, while my colleagues in New York, Detroit and other hot zones are scrambling around, overwhelmed with scared sick people, and dealing with crappy protective gear.
Beaumont hospital in Detroit btw is at capacity, last count with 635 Covid or suspected pts. They are turning ORs into ICUs down there and running out of room.
We will have our turn, I guess, but right now it still feels surreal.

The total for the state is 2295. And 43 deaths. the updates for Wexford County still show us with only 1 Covid19 positive test. There have been over 100 tests run locally and about 60 have come back negative. The rest are still pending. Only a very small number in our hospital are being monitored for possible infection while they wait for tests to come back. TC has had 3 positive as of today.
Hey Missaukee and Mecosta you’re still Covid virgins!!! Grand Rapids btw is at 36 cases.

Ok so Who wants me to be Dr Sunshine!!!! Show of hands!
—So on the positive side of things let’s hear it for the federal government for finally actually doing something to help people. 2 trillion dollars—-that’s 2 thousand billion dollars (with my best Mike Myers Dr Evil voice).
That’s going to help people get thru this economically.
—Testing is still a major problem. There still are nowhere near enough tests and the turn around is still slow and it all has to go down state. BUT newer antibody tests are starting to be ready for prime time. Those are going to be incredibly useful for disease tracking. We will be able to find out who has antibodies and who has recovered. Lots of people had very low grade infections. So guess what that means? Those that have antibodies we can test and they can go back to work. Health care providers that show antibodies will be able shed most of the PPE.
That’ll be a turning point as well. The tests are close, supposedly.
And newer quicker point of care tests, like a flu test, are almost there as well.
So testing is being prioritized, massive resources are being mobilized for it but it just takes time.
If we can find you, SARS CoV2, we can stop you.
—There was also a small study that looked at reinfection. Initially there was concern that people in China were getting reinfected. They wanted to see if that was possible though they had to use monkeys (guessing they had a tough time getting volunteers to be deliberately reinfected). In brief, the monkeys were infected, recovered, then given another big dose of virus. They did not develop symptoms and showed a brisk immune response showing that reinfection was unlikely. (This was a VERY small study. 4 monkeys. But very encouraging regardless).

—The final thing I found encouraging is the fact that this virus does not appear to be mutating. It’s basically the same everywhere. So a vaccine may only have to be once, maybe twice with a booster, but unlikely to need it every year like the flu, which mutates often due to the way it’s built. If they had to chase it with multiple mutations…it would not be quick to get that vaccine ready.

So everyone needs to keep this going. It’s kinda become this bizarro new reality. But we only have to look as far as Detroit and New York to see what can happen. And it may still. This is deadly serious sh*t. If we end up like NYC we are in trouble up here—we won’t be able to keep up and will be swamped quickly. This early insulation from all of this should NOT give you false confidence. Hope, yes. But dammit stay home.
However if we keep getting ‘A’s on that creepy phone tracking app then we are giving ourselves as good a chance as we can to keep those numbers from matching theirs.