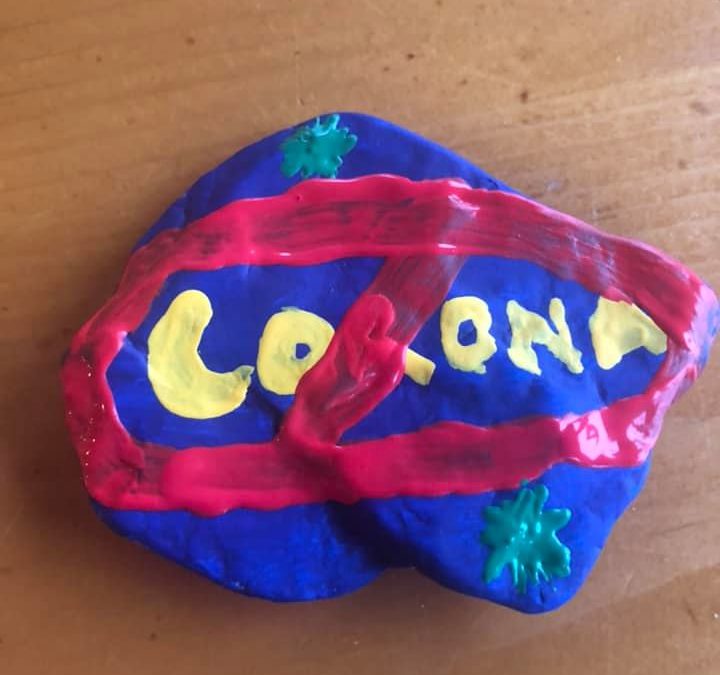 My son Ben painted some rocks.
This was my fav. Gonna leave it on my desk to ward it off. I’m hoping it works.

So today the US currently has the Gold Medal in most Covid19 virus infections in the world. Awesome.
Michigan is solidly in the top 5 in the country with almost 3657 confirmed cases and 92 deaths. 800 new cases confirmed TODAY.
1 week ago, btw, we had about 300. So that’s now what the epidemiologists call an ‘oh sh*t’ growth curve.
Metro Detroit, just 3 hours south of us, is a Hot Zone right now, with about 75-80% of the state’s cases and almost all the deaths. At least 2 hospitals down there are near capacity and are rerouting pts to other hospitals nearby. Those places are starting to run out of everything.
Wexford and Missaukee each still have 1 case but with more in the hospital suspected with tests pending. (I just got word the Lake City pt has passed away in the hospital. So we now have our first death). TC also still sitting at 3 confirmed several pending.

So I’ve read some more about the clinical manifestations of this and learned a few things. I wanted to share some of that.

Once infected, Most people have 3-4 days of symptom free infection, during which they may shed virus without knowing it. That’s partly why this is a sneaky snake of a virus. Combine that with the fact it’s highly infectious and the fact we have basically zero built-in immunity and that is why it’s spreading so fast.
On day 5-6, people usually start to show symptoms. Everyone knows about the cough. The fevers. The headache. The profound fatigue. But there are also commonly vague abdominal pain and nausea, usually without vomiting. Loose stools and diarrhea and no appetite (anorexia) complete the GI picture. I also learned a bunch of people get conjunctivitis or pinkeye. That was news to me. And the one that stood out even more was that up to 30% of Covid19 pts have an almost complete anosmia, or loss of smell, early on in the infection. And That is often the only early symptom. So something to look for. If your husband starts giggling, like he usually does after he passes gas, and you don’t smell it, than well…..there could be a problem.
Jokes aside, if you start developing these symptoms you need to not just stay home but distance yourself AT home to see what develops. As we’ve discussed, if things get really rough, then you need to seek medical care. Day 10-11 seems to be the time frame when things go south if they are going to.

So what can you do to not get this? Besides painted rocks on your desk? Hint: It’s the same reason Cadillac only has 1 case, Missaukee one case, Mecosta 1 case, because you’re doing it. Don’t gather. Keep it up.
But here’s the thing—it’s tempting to look at those numbers and take our foot off of the gas. Some of the national rhetoric isn’t helping.
What’s allowed? That’s the tough part. You know about the 6 feet apart. But can you stand at the end of the driveway and talk to your neighbor in their driveway? I think so. Take a walk with a friend who keeps their distance? Probably, as long as neither is coughing. Time outside is time you likely won’t get sick. Go to the store? Yep. Just avoid touching your face and clean your hands ASAP. Gather close friends for a card game? ALARM ALARMALARM. Nope. Avoid indoor gatherings. Avoid car rides with people you don’t live with. Kids’ play dates unfortunately are I’ll advised. Anything that puts you in close proximity to someone, especially if it involves touching the same surface. And coughing is the most common way it spreads.

I’m no expert. Unfortunately no one is. None of us REALLY knows the rules and I don’t make them. Nor does the governor. Or the president. Could you do all of that and still get it? Yep. Because the virus makes the rules. All you can do is stack the deck as much as possible.

We just have to use common sense. We have to balance this caution with keeping our sanity.
Because I can already see it slipping. On Facebook. In conversations with pts and friends. The rules we are following suck. It’s been a week already. Everyone is sick of it. People are losing money. And as the weather warms up, and we don’t see an immediate influx of cases up here, and our national leadership says ‘it’s fine, go back to work and go to church on Easter’ than I see this eroding further.
And this is where I’m going to take the gloves off. It’s Time to get real, local folks. Cuz you need to see some math.
No politics. No opinions. Just math.

Cadillac Munson hospital serves between 50-60k people. That’s Cadillac, Lake City, McBain/Falmouth, Manton, Mesick, Reed City Evart, the Pine River area, Marion, west to Wellston. And everywhere in between. And a lot of people come even further to our area as a matter of choice (forgive me if I forgot anyone).
Our hospital as roughly 80 beds (and that’s a stretch). And last I heard we have 11 ventilators, though that might be able to go up a few in desperation with anesthesia machines.
So let that sink in a sec. 50 thousand people.
80 beds. Oh. Wait….they can just go to TC, right? TC has about 425 beds. About 40 ventilators. But serves about 145k people in the ‘metro-Traverse City’ area. And both of those population numbers, btw, are going up significantly as the snowbirds return home from parts south.
So That’s it folks. Basically 200,000 people up here with about 500 beds and 50-60 vents combined.

Most populations that have dealt with this already have had up to 75-80% of their population infected. That has varied based on population density. And for sure ours is not very dense at all. Very consistently, though, has been the fact that about 20% of those infected need to be hospitalized and a 1/4 of them need critical care (an ICU bed).

So you wanna know what keeps me up at night? Project that on to our population.
Let’s just assume the Cadillac area is incredibly young and healthy. And we stay hunkered down and only 25% of our folks gets infected in the coming time frame of this pandemic (whatever that may be).
Do that math and That’s about 14-15000 people.
20% of that? 3000 people needing an admission. A 1/4 of that? 750 ICU beds. And I’d argue it might be worse because a whole lotta people around here are not exactly in perfect health.
And we have 80 beds. And 11 vents.
In Detroit they are moving people around to different suburban hospitals to distribute this sudden load of pts.
Where are WE gonna go? Falmouth General? Our Blessed Lady of the Steelhead in Wellston? I sorely wish those existed.

We have exactly one chance to avoid those numbers. One chance to dodge the bullet. I’m not trying to freak people out. Or incite a riot. And I hope to God we only see a fraction of that. I AM trying to get you to realize that we are not immune to this and our natural social distancing that exists up here is only going to take us so far. This is happening right down the road. That’s Detroit. Not China. Not Italy. Not New York. Nope, our Home of the Red Wings, the Tigers, the Pistons and our beloved goddawful Lions.
If we get that volume in a short time we are in trouble. We’ll choke on it, like they are in Detroit. If we can spread it out….we MIGHT be able to manage.

We simply HAVE TO hold on until we can get adequate testing. Once we have those tests we can loosen up a bit because we can aggressively isolate infected and their known contacts. And, no, I don’t know how long. The big cities are getting priority so we are still only able to test the sickest here. Soon, I hope. Gonna press me for a guess? 3-5 more weeks of this but who knows.

In the meantime we need to be the prairie dog when the hawk is circling. And stay the hell in your hole. Because if that horrible scenario plays out, myself and all of your medical providers will do everything we can. Munson is getting ready what can be gotten ready.
But we can’t keep you from getting this virus. Only you can do that. And we aren’t going to be able to do much for you if you do get it. We simply don’t have the beds, the vents, the supplies, the people to handle those kinds of numbers.
Please don’t put us in that spot. Distance yourself as much of you can.

Sorry to be the Debbie Downer tonite. But all of this needed to be said. Reality is scary. And this is not going to be a short term problem. This thing is going to come in waves and we have to be mentally ready and strong for a long, difficult time.