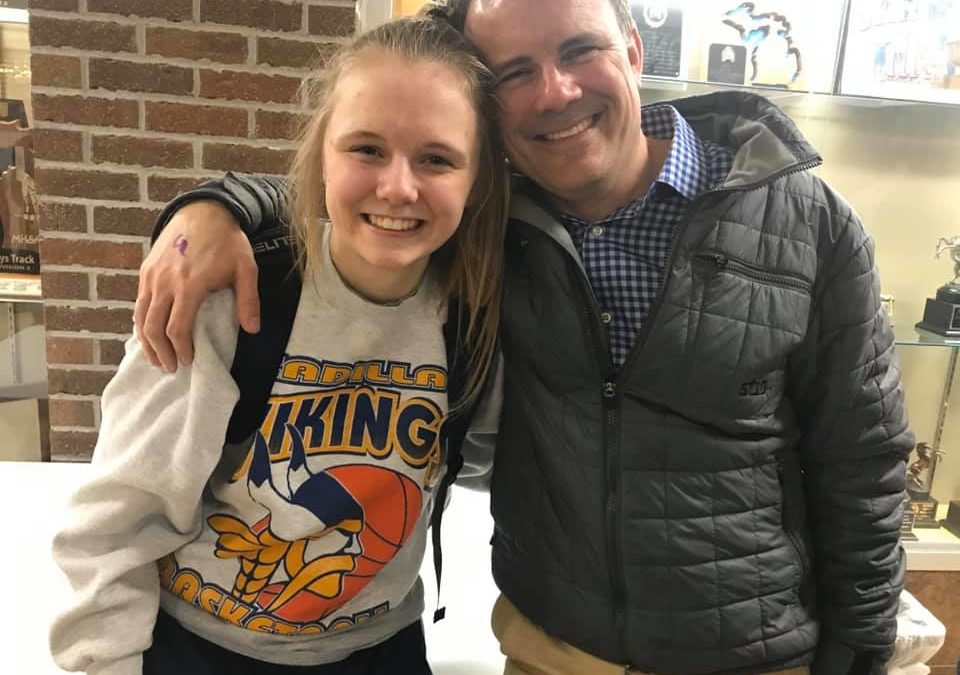 This is my daughter, Molly. She’s about as level-headed as a 17 year old girl can be. I try and take after her.

So I’m going to respond to a few things today. I had time. And because this Facebooky blog thing has gone a little nutso I’ve had a ton of questions.
First off, I will repeat to everyone that I am not political. Not a Democrat. Not a Republican. I’m a Pragmatic. It’s not a real political party because apparently it’s not possible to be realistic and practical and belong to either party. But if it did exist I’d be a card carrying member.
And I am hanging my head in disappointment that a global pandemic infecting over a million people and killing tens of thousands, with more to come, is now turning into a national partisan debate about its validity and its severity.
Do NOT try to draw me into your politics and get me to validate some wild-assed completely illogical politically-charged conspiracy theory. I’m done responding to those and I won’t answer any more attempts. I don’t have time for your bullsh*t so don’t bother.

Here is a fact and there is zero anyone can do about it—the virus is here. It doesn’t care who you are or about your political leanings. And it’s killed a lot of people. And it’s going to kill a lot more before we get a vaccine to protect ourselves.
I keep hearing, still, that this is just another flu-like virus, that it’s no different. Well, you’re wrong.
Remember, the flu season is about 7-8 months long. The CDC says this year so far there have been 39 million pts in the US who have had influenza and This year we are at roughly 24000 deaths. That’s a death rate of 0.06%. And flu season starts in September.
True, there are years that it’s worse. But again it’s spread out over months. You ever heard of the ICUs overflowing with flu pts? No? Well it’s cuz it doesn’t happen. People die from it but not all at once. Not in these numbers.

Today the US went over 300000 people infected with Covid and roughly 7600 are dead from it. That’s a 3.5% mortality rate and that is almost all in ONE MONTH. Sure, there are probably more people with it that aren’t being counted (not enough tests) so that brings down the death rate. But there also people dying at home from this, that never get tested because they’re dead, especially in the inner cities.

Keep in mind the flu is everywhere each year. Every state. Every community. Some worse than others. But it is widespread throughout the country. This coronavirus hasn’t even touched large sections of the country and it’s just starting in our little part of it. And it hasn’t peaked yet.
If we ‘let this run it’s course’ and just go for that mystical place of herd immunity and just ‘get it over with’, as I have seen many propose we do, we are going to lose a lot more people than we would have if we can slow it down.
You are NOT going to convince me or any of the hundreds of very smart epidemiologists who feel otherwise. Spreading it out will not only spare many from infection but allows us to be able to handle the ones that do get it.
If your answer is then ‘well, it’s costing a lot of money to do this and if we lose 1-3% of the oldest, sickest part of the population and just get it over with then so be it’ I can’t even converse with you because you are so fundamentally different from me that I have zero interest in doing so.
I am a physician, who along with my partners and colleagues, have dedicated our lives to healing and preventing disease. If we can only do that by doing what we are doing then that’s what I am going to promote. End of discussion, at least as it relates to me.

On the other hand, we cannot panic. We are at an inflection point this week, folks. A fork in the road. The projected peak in Michigan is in the next 7-10 days.
Stay the course. We need to get on the back side of the spike. Get more testing when it becomes available. Then we can slowly start to get segments of people back to work And Relax the restrictions a bit.
But in the meantime calm, rationale decisions, listening to the experts, not the media or the politics. That is what is going to beat this.

Later this week I’m going to post on what I think you should do if you do get this. I kind of talked about meds in an earlier post but I’ll update it with what we’ve learned since. There’s been a lot of questions about that so I’ll do my best.

Thank you and take a page from Molly’s playbook. Stay focused. Calm. We will get thru it.