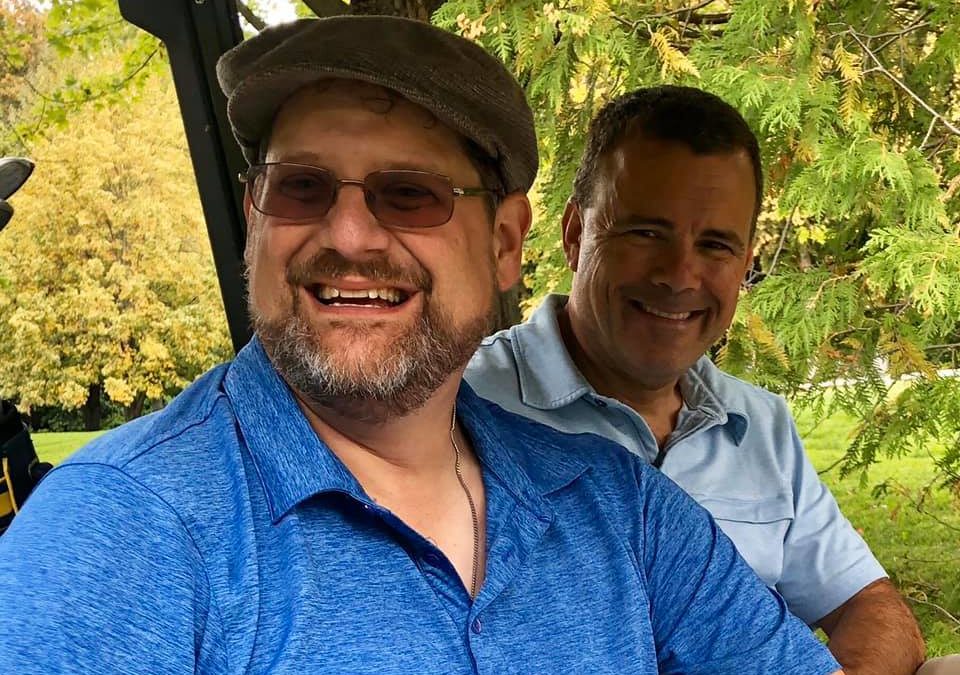 This is me and my partner, Dr Brandon Peltier, playing golf last summer with our wives on Mackinac Island. I can’t wait to again play golf badly with someone who is even worse than me.

I promised I’d post again this week and this time stick to what I know more about, the medical rather than the philosophical.
I had gone over some of the relevant medical stuff in an earlier post but thought I’d talk about what to do if you get a cough based on some newer info.

Once I again I need to drop a disclaimer. I’m no expert in this. This advice I give, I give freely, and if you disagree, or your personal doctor disagrees, I am not going to argue about it. I would stress that if you’re getting sick you need to call your doctor’s office and get advice and do what they tell you. I cant possibly know everyone’s medical situation who reads this and your local situation may be different. This is my best advice based on my gleaning of what I have seen available and my experience as a small town family doctor for twenty years. Nothing more nothing less, Take it for what it’s worth. I hope it helps.

We have learned a lot about the virus but unfortunately there have been only limited advances in treatment and still limited testing ability. The testing hangup has changed, btw. Initially it was the state lab’s ability simply to handle the volume of tests. Now the problem seems to be a widespread shortage in testing reagents, the chemicals needed to run them. Who knows when that is going to get addressed. It’s been disappointing to say the least.

So what do you do in the next week or two if you get a cough? That’s when we are supposed to peak with this but it may also drag on. So What’s next if that happens? First off, remember Not everything that makes you cough is Covid. Seems obvious but it’s only natural for your brain to go there. It’s April—-guess what happens in April. Allergies. So if you have spring allergies take your usual stuff, get back on Your favorite Antihistamine. Take a Benadryl at night. Then see what happens. If that cough doesn’t worsen, no fevers, youve got the itchy eyes, sneezing but your Claritin helps, well, it’s probably not Covid. Monitor yourself, stay home. And call your doctor if not better.
One good thing about all this quarantineing (is that even a word? I guess I just made it one) is that staying home has pretty much shut down all the other viral crap that’s out there. We were in the middle of a bit of a flu spike when all this started. We haven’t seen a flu case in at least a week.
So that being said, if you call us with a sudden fever and cough (and that’s what you should do) we will probably still flu test you. Call us first and one of us will come out to your car all gowned up and stick a swab up your nose. We can run that test right then. If it’s positive then we give you Tamiflu and our usual flu supportive treatment. You’ll still be miserable (flu still sucks) but at least you’ll know what it is and it’s not Covid. .
A few differences worth noting. Flu is usually very sudden onset, like hit by a truck sudden. Covid apparently is slower developing. Flu does NOT often come with diarrhea and vomiting (common misconception). Covid often does have diarrhea and nonspecific abdominal pain, often as the first symptom.. Flu is famous for tons of nasal drainage and congestion. Not so much with Covid though there can be some.
Covid has been shown to have pinkeye with it and flu usually doesn’t, though people with often complain of pain behind their eyes. Covid also has that very specific symptom of loss of taste and smell—I’ve never seen that with flu.
Both viruses are going to give you very high fevers, painful cough, and just feeling profoundly exhausted.

So if you’re flu negative then you very well could have Covid, especially if you have that spectrum of symptoms. If you do have a known contact like a family member or coworker with it, we can probably get you tested. If not, and you’re not a high risk pt, they’ll probably deny it. Remember we don’t have control of that. The state health department still decides who gets tested and there is still a shortage. But this is why it’s better to work with your doctor, they can get it set up and make the calls. We basically have to call and present your case and then they decide. If you qualify for testing you’ll go to the hospital for the test (we can’t run that yet). If your doctor is worried you’re unstable and really sick they’ll send you thru the ER. If you’ve basically got cough and fever but you’re breathing ok you’ll go home to wait for the test results. You’ll need to home quarantine then, meaning minimize contact with your family as much as possible. You should probably have a family plan in place as to how you’d do that if it happens. Hopefully the test is back in a couple days. If it’s negative Then they’ll likely keep you quarantined for 3 more days after your last fever then let you out. Unfortunately the test isn’t perfect.

And that’s what we need to talk about next. What to do if you’re positive.
So you’ve probably heard a lot about ‘asymptomatic shedding’. They’re talking about the 20% of people (and could even be higher than that) that have this virus and no symptoms and are smearing it all over the world unknowingly . It’s mostly kids btw, the little turds (thank God, actually. Can you even imagine this thing if it focused on kids instead? It’s bad enough. I’d lock mine in the basement. A nation of ‘Flowers in the Attic’ children, the 2020 version.)
On the other side of the spectrum, There is another 20% of pts that gets sick enough that they need to be admitted. (That’s for another post. This one is long enough. The main symptom, though, that gets you admitted is worsening shortness of breath. If that’s happening at home it’s ER time).
What about that middle 60% of infected? About 1/2 of those (30%) have pretty mild symptoms. Maybe a few days. A bad cold. And it’s pretty manageable for them. Lucky ducks.
The other, 30%, though, still get pretty sick.
So what can you do for it if that’s you?
I do have to stop here and tell you at this point to make sure and call your doctor to check in if that’s you. Because if you’ve got underlying health conditions, if you’re older, we will have more monitoring for you to set up. Mostly by phone. We may modify medications. We are also going to try and keep you out of the clinics if we can as we still have people coming in for all the other stuff we take care of and we have to protect them and our staff.

There’s Lots written about ibuprofen. Based on what I’ve seen I think it’s worth not using any NSAID if you’re suspected of this infection (ibuprofen, naproxen, or aspirin). Tylenol is ok. Lots written recently as well about letting the fevers go a bit. This is new. The thinking is that better outcomes are occurring with quicker improvement as the virus doesn’t like the higher temps. So if the temp is lower grade then you may want to let it roll. This is somewhat controversial but I’d try and keep it less than 104 though and use Tylenol and cool showers or baths to do that.

You HAVE to drink. Whatever sounds good to you. Water, pedialyte, 7-UP, Gatorade (which I think tastes like fruity sweat. Blech.). But dehydration is a major risk. You probably won’t want to eat much but try and eat a little something if you can. Lightly buttered toast, toasted waffles, crackers. Anything just to give you a little energy.
You need to move your lungs. It’s gonna hurt. But you gotta breathe deep, arms up over your head, walk around a bit. You won’t feel like it but that’s what can prevent pneumonia.
If you smoke btw you need to try and do everything you can RIGHT NOW to quit. Your risk of bad outcomes is anywhere from 3-15 times worse than nonsmokers, depending on what you read. But it’s ALL bad. Smokers don’t seem to be getting it more often but when they do the percentages all change for the worse. If you quit, even this late into it, you’ll have a much better chance of clearing it and not ending up in the ICU. I think smokers are nuts for smoking anyway but now? It’s just soooooo risky. Do yourself and your family a favor. Now is the time.

The final thing I’ll mention on this interminably long post is all the talk about hydroxychloroquine, also known as plaquenil. You-know-who has made this a big deal.
Here’s my take:
1). It should only be used with extreme caution and only with one of us directing you. If you somehow get a supply of this, you have no idea what you’re doing and could possibly seriously mess yourself up. It’s not a drug we use lightly.
2). It probably DOES have some benefit early on in the course of the infection. How much benefit we just don’t really know.
3). It probably does very little in preventing infection and shouldn’t be used prophylactically.
4). The supply issues of it are a major problem. Again, locally it may be possible to get it but not without close coordination with your doctor and the pharmacy and not without strong suspicion or confirmation of infection.
5). The Governor forbid its use ‘without clinical indication’ for its use. I interpret that as not hoarding it, not using it in prevention, and only under the direction of someone who knows what the hell they are doing. If that’s going to get me in trouble, well I’m willing to accept that. I don’t think it was Governor Whitmer’s intent to prevent appropriate usage if someone in my position deems it may prevent a hospitalization. If your doctor thinks it’s worth a try then I think they can probably justify it if you are in the thick of being really sick. It is NOT a slam dunk though and there is a ton to consider beforehand. You’d have to know the risks and have that discussion.
6). I would be terrified to use it conjunction with the antibiotic Zithromax, as you-know-who has quite publicly proposed, due to the high risk of cardiac arrhythmia that goes with that combination. Only under inpatient care and with continuous cardiac monitoring and even then I’d be nervous
And even with all of that we still don’t really know how much it might work and how much harm we could cause.

Good. Grief. I’m sorry. That was a lot. Take a break and watch a cat video or something.

I sincerely hope that what we are doing is working. It seems to be. The nightmare scenario that we all feared is still possible. We aren’t thru it. But I think we can maybe just maybe have some hope that we will be, at least in Michigan, on the back slope soon. But it’s only going to happen if we keep this up for awhile longer. Then hopefully we can leave our homes, all of us with some really bad hair, and get back to our normal lives.

Take care of yourselves. This has changed our life for awhile but it won’t last. We will win. Hopefully sooner than later. But not quite yet.