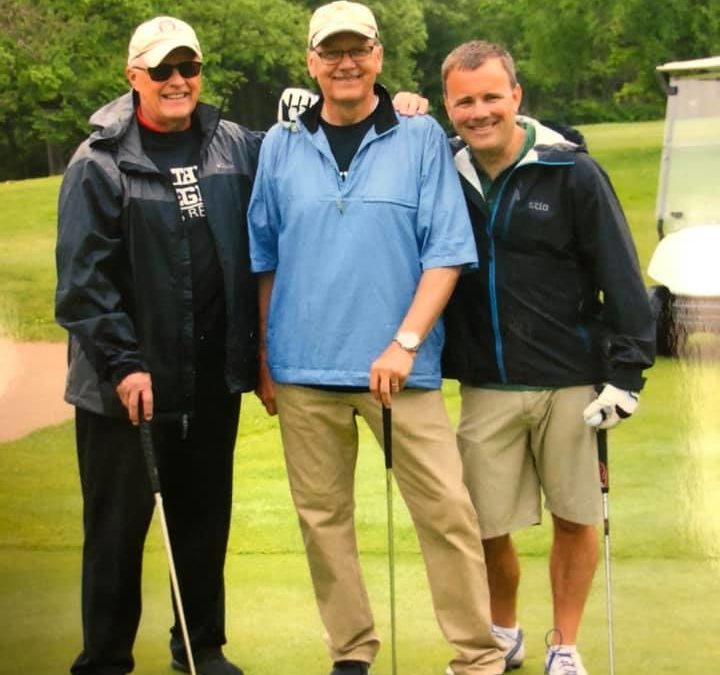 This picture is a flashback to last summer, when social distancing was something you only did if someone smelled. You may recognize these two old dudes with me at their retirement party (Dr. Grace and Dr. Mutch). Miss you guys, though having to do our job mostly by phone is something I think you’ll probably be glad you’re missing out on.

On that note, for anyone reading this it is now likely that your doctor can ‘see’ you now by phone and your insurance will cover it. You don’t have to leave your home and it’s available thru your phone so it is certainly convenient and definitely reduces risk of exposure. But It’s not ideal. Even with the teleconference, which is two-way video, it’s a distant second to being in the same room with a pt. There are a lot of clues we use to gain information that are missing, and while it is certainly better than nothing, I won’t miss it when things normalize. Bottom line, though, is that you don’t have to go out if you need to go over something, though it’s tough to inject your shoulder, cut off a skin cancer or look in your ear thru the phone. Sometimes you’re just going to have to come in. We can however do a lot by listening and talking so don’t be afraid of asking your doctor for that if you need to. Pretty much every office is set up for it now, one way or another.

I haven’t posted much recently as there really hasn’t been that much new, except that the amount of hatred and vitriol on social media has gone thru the roof. I’m going to post more info today but again don’t try to drag me into the cesspool of political diatribe this crisis has become. I’m done trying to answer inflammatory crap. I’m sticking to facts going forward and will not be baited so don’t try. (If I respond with this 👅 it doesn’t mean I’m trying to lick you but it does mean I’m sticking my tongue out at you.)

The Munson system today has had a total positive tests of 155. That’s up 10 from yesterday. But they did 85 tests in the last day as well, up to 1345 total.
17 people are positive and admitted in one of the three hospitals, mostly in TC.
The death toll is steady at 9.

So the good news:
1). That’s a pretty flat curve, folks. (Two days ago the number only went up 3 pts testing positive). The bottom line is that What we are doing up here is working. As disruptive to every facet of our lives that this has been, Our inherent distance from each other, plus all the closures, and people for the most part following the rules, have combined to do the job to this point. There is no debate about that. That’s a very low number for the number of lives up here. Obviously the issue is how long do we need to do this, how long can we sustain it and to what degree and when can we let up.

2). Testing capabilities have dramatically improved. To the point that not only can we get tests back quickly on the inpatient side of things (within 1-2 hrs) but even the send-outs are 1-2 days now. Munson now has the capability to do in-house testing. AND most importantly the gloves are about to come off officially, I hear, in terms of who can be tested. Meaning if you have Covid symptoms you can probably get tested, without all the restrictions placed previously . You’ll still need to call your doctor for the order and approval but the barriers to that are coming down. Next step will be drive-thru and in office testing and without an order required. That’s not here yet though but I predict it will be very soon, hopefully within a couple weeks. These increases are enormous improvements from before.

3). Serum treatments for sick Covid pts are now becoming mainstream. In fact, if you had a confirmed positive case and are 28 days out from symptoms, you can call 1-866-702-4673 and they will screen you and then walk you thru it. If you qualify they will draw your blood, and if you have the antibodies, will use your serum to treat people in ICUs, probably locally. This is here waaayyyyy faster than I thought it would ever be here. And these treatments DO work. But they require donors. I don’t know much more than that btw so if you have questions call that number.

Here’s the bad news:
1). The numbers are still high across the state, though maybe starting to plateau, in terms of new cases and deaths. This virus isn’t done with us yet and though we may have missed the initial brunt of it, and our nightmare scenario hasn’t happened up here, we are not even close to being thru some very high risk for a lot of people. It will not take long to completely fill those hospitals if there is a surge. Like I’m talking just a couple days. So figuring out where to go from here is going to be a major challenge because we simply don’t know the best way.

2). The antibody testing we all so desperately want to happen has been a mess. And nowhere ready, at least locally. The tests out there have been rushed into place and their veracity is so far pretty questionable. One of the biggest issues is questionable accuracy about whether or not the antibodies found represent the SARS-2 version of the coronavirus. Previous infections with other versions of coronavirus may muddy the antibody picture with very similar antibodies. There’s a lot of science that still has to be done.

3). The University of Michigan has pretty much stopped using hydroxychloroquine and chloroquine to treat Covid pts, both outpatients and inpatients . If you know me at all, you know my blood is Green. With little football-shaped White speckles.
There is one Ann Arbor team, however, that I will stand up and yell ‘Go Blue!’ at the top of my lungs for—-(no, not Jim Harbaugh’s team) and that is the UM Medical Team (btw that is a figure of speech. Don’t push it—I’m not going to actually DO that.). They have been an extremely reliable source of tertiary care over the years for hundreds of my pts and the care they’ve received there is as good as they can get anywhere in the country.
If UofM says it don’t work then as far as I’m concerned it don’t work. It’s not politics. They aren’t MAGA haters. They’ve been using those drugs like crazy.
It just didn’t work.
The French have also undertaken a large study with both drugs, trying to replicate the positive results of the earlier smaller studies. So were the Brazilians. Both have since stopped the studies due to ‘more harm than good’ situations.
So as much as we (as in the collective world’s population) wanted these to work, and though they are still being used in a lot of places, the promise of them has probably been shown to be fools gold. There may be some specific clinical scenarios where they end up being beneficial. But I’m going to follow the lead of the people I trust and UM is very high on that list.
Other than some of the newer IV HIV antiviral drugs, which DO look very encouraging but are very limited by simply being ‘not enough, anywhere’, and the serum infusions we talked about, there just doesn’t appear to be much that is working. Supportive care backed up by appropriate use of ventilation is the still the mainstay.

So going forward I’m going to leave you with one little bright spot. And I’m kinda hangin’ my (MSU) hat on this and if it’s wishful thinking so be it.
A researcher went back and looked at all the other coronavirus infections we’ve been dealing with for years. There are 4 major other strains. They cause bad colds and rarely are they severe. it was noted, btw, that we don’t hold immunity very long to them. Meaning you can have multiple infections in your lifetime with the same virus. And while that kinda sucks, they showed that every one of them started showing up in December, spiked in late February or March, and were mostly gone in May. So if that’s the case….and this little bastard follows a similar pattern as its cousins……maybe May and the summer will indeed bring a natural downturn to the spread of this infection, giving us until December to get our sh*t together for the next round.
We can hope.

Be nice to each other, geez. It’s a deadly serious thing going on out there. And a lot of people have too much time on their hands. But before you get nasty with someone, walk away from the phone for a bit. You’re not going to change their mind one little bit with that nasty post, just like they didn’t change yours with their nasty post. Rise above it, for godssakes. We will get thru it either way. The nastiness just makes it…..nastier.