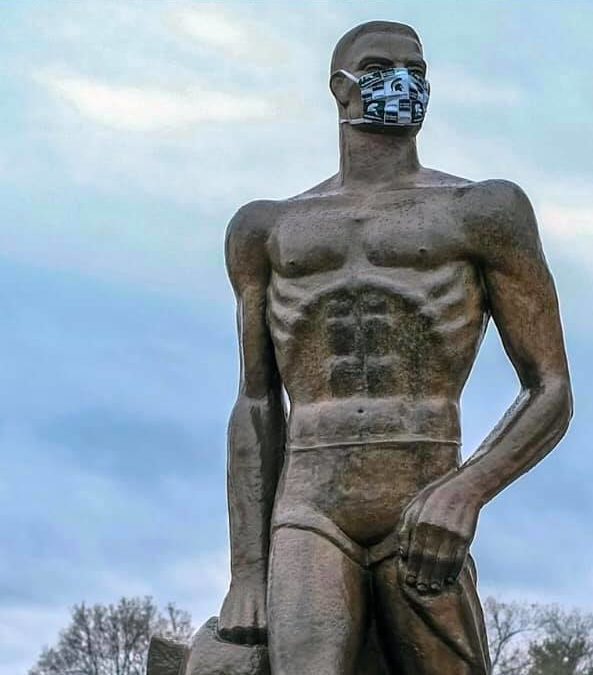 Love this picture of Sparty.

Lots of people asking for some clarification on a few things so I thought I’d do a lil’ end-of-the-week post, Celebrating the fact that we can golf, get in our boats, buy or hire landscaping, paint something, and shine UV light in our orifices to cure Covid (by the way if you are going to do that and sunburn your mouth or…..other places….do NOT come crying to me.
Don’t drink bleach either.
That’s your free medical advice of the day.)

Anyway I again need to talk a bit about testing.
The big problem is that testing rules are constantly changing and people are confused. Hell, I’M confused half the time as they change it pretty much daily. So I’m going to try and give some straight answers on what is available and why.
(Keep in mind this mostly applies to those of you living in the northwest lower peninsula of Michigan. This may be and probably is completely different elsewhere. Every single region of this country and every state is handling this differently. That’s part of the problem….but a debate for another day)

—-Testing for SARS2 is still available thru your doctor. And we will order it like we have been if you have symptoms. Just to clarify, these tests only test if you have the virus currently. They will be positive if you are shedding enough virus to be picked up by a genetic test. A positive test is pretty reliable but there is a fairly high false negative rate—as high as 30%. (It is felt that a lot of the false negatives are due to inadequate sampling. If you ever get tested, and it feels like the nurse is biopsying your brain then shes doing it right. That swab needs to go wayyyyyyy back there).
Pts that are hospitalized, health care workers or first responders, pts in high risk living arrangements like nursing homes, and people that are over 65 or have high risk medical conditions with symptoms will have their tests run at Munson in the in-house lab. The test comes back in a matter of hours.
Anyone not in those categories but has symptoms consistent with Covid19 can also get tested if your doctor feels it’s warranted. The test is the same, still collected at the hospital, but is sent out to the Mayo Clinic. Those take a couple days to get back.

Here’s the catch—we can’t test everyone that wants a test. If there are no symptoms, the patient does not meet the high risk criteria, and basically just wants to ‘know for sure’, we can’t do that yet. Not because we’re being mean. There just isn’t enough testing stuff to do it yet on everyone that wants one on demand.
The latest shortage up here is the swabs for the test. And yes you’d think it would be simple to just stick a big ol Q-tip up there and that would get it done. But apparently, and I don’t really understand all the whys and hows, they are SPECIAL swabs. It has to do with standardization of the test and apparently there are significant differences in testing results if you use different Q tips.
(Believe me they are really trying to figure out if other specimen collection swabs will work, specifically penile and cervical swabs for gonorrhea. If that’s TMI, I’m sorry).

Michigan overall has done a LOT of tests. Not sure where we rank now but definitely in the upper echelon. the Munson system has done over 2000 tests with 242 total positive (24 in Wexford. 14 deaths total, still 2 in Wexford. Btw right now 3 admitted with Covid in our hospital, none on a vent).
Remember a few posts ago when I told you how much work was being done? Getting in-house testing set up was a big part of that. A lot of hospital systems don’t have that. Munson does and can run a lot of tests on site. This gives a rapid turn around which is unbelievably helpful to figure out what to with people when they come in sick.
They will continue to do so BUT…..they only have so much in terms of supply. So we still have to follow rules that restrict testing to symptomatic people.

Ok, quick summary. Testing is continuing to get better. Quicker. But Supplies are still limited. Testing is available if you’re sick. Be patient. Don’t yell at us.

Which brings me to the next subject—antibody testing.
Good lord where do I even start. I’m no immunologist but It’s impossible to summarize what I know of immunology in a Facebook post. But I’m going to summarize a few basics for you so you understand the difficulty in doing these tests.

—to drastically oversimplify this, when you are exposed to a pathogen (a virus, or bacteria, or even a fungus) that you haven’t seen before, it starts an immunologic response and cascade that leads to the production of antibodies. These then signal other parts of the immune system that there is a problem so they can kill it. It’s how vaccines work—we inject proteins from a pathogen or inactivated virus particles that trigger this production so that when you are exposed for real, those antibodies exist already and get the job done before you get sick.
The problem with SARS2 is that we haven’t seen it before. And it takes awhile for the immune system to do this—there are really no antibodies made for at least 2 weeks. That’s a big reason why some people get so sick. (And it’s also part of the mystery as to why others don’t at all. There may be partial immunity already from the other coronavirus’s that circulate yearly—we just don’t know yet).
When we do make them, the acute, freshly made, still kickin’ ass antibodies are called IgM antibodies. That’s what we need to recover from the illness and it’s what we need to measure and look for with these tests for immunity. Eventually, we will make IgG and IgA antibodies which are the ones that settle in for the long haul and will attack during the next exposure.

Here’s the problem (again trying to keep this the least text-booky as I can) with the current antibody testing for this virus—-it’s all over the damn map. There are bunches of these tests coming out. Different companies. Different parameters. Who knows all the differences. And exactly ZERO of them have been shown to be accurate enough, proven reliable and accurate, to be something we can bet your life on. Lots of false positives and false negatives. Again I don’t know all the details but I think the biggest problem has been the differentiation of the SARS2 IgM antibodies with the IgG and IgA antibodies of the other coronavirus’ that we’ve gotten exposed to previously. That’s hard to parse out because there are so many similarities.
If you had a cold last year from our usual run-of-the-mill-doesn’t-kill-you-just-gives-you-runny-nose coronavirus strain, and eventually you make IgG antibodies to it, and these tests say you’re protected from SARS2 because of the presence of those antibodies, and you’re NOT really protected, well then that would give you a false sense of security. Likewise if the test can’t pick up the new IgM antibodies then you might miss someone that’s immune.

We simply have to give the science time to play out. They are doing that furiously. Those wacky crazy nerdy scientists all over the world are scrambling like crazy to get this done. But understand there is a tremendous demand financially and politically to release these as soon as something is available and it’s looking like most of them are premature. Lots of claims. Lots of refutations of claims. It’s a mess because it’s pretty Wild West with very little FDA oversight.

So here’s the bottom line—we can’t order antibody tests for you. Not yet. Munson labs don’t have them. You can probably find someone out there with a private company test that will be happy to test you (for a fee) but I’d be skeptical of any result not vetted by our lab people.
It’s coming. I promise. But it’s not reliable yet. And we simply don’t have faith in the ones out there, despite what President SwallowtheClorox, or anyone else, tells you. I have faith in our lab folks. I have faith in the U of M lab people. They are all really really really really smart people working furiously to get this right. There is no conspiracy to prolong this. It simply takes time.

Hang. In. There.
We’ve seen just yesterday what can happen if it gets loose, in Missaukee county amongst some of the farm workers. And in the Baldwin Prison. This whole semblance of We Dont Have It Here is still terribly fragile, and we are still extremely limited in our ability medically to respond up here.
14 people living up here have tragically lost their lives to this. And 50 THOUSAND people in this country have already. And There will be more.
But Northern Michigan is WINNING RIGHT NOW. Not because of the medical personnel. Not because of the government. But almost exclusively because you are doing what you’re supposed to.

And now restrictions are starting to loosen up a bit. It started today. As the weather warms up, and the curves stay flat, it’ll loosen further. Just keep doing what you’re doing.

Have a great weekend. Enjoy your new found freedom—go buy a shrub or something.