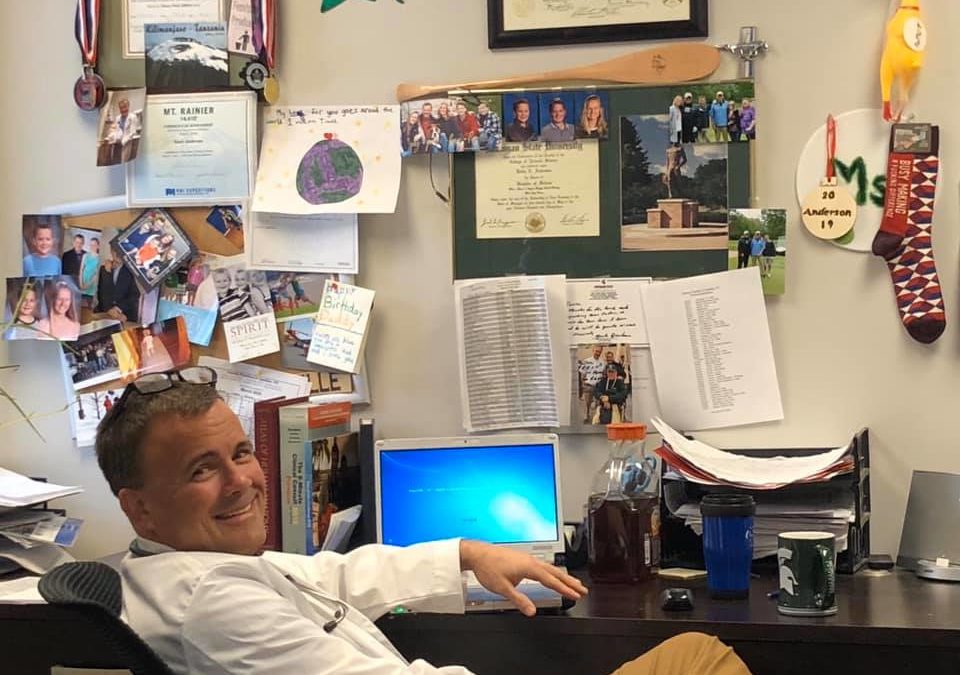 So I’ve had a lot of requests to keep going so I will. Again thank you for the compliments, prayers and support. It means a lot. I have a fantastic loving team at home. And I come to work and I work with amazing people. I couldn’t do what I do without them.

This, btw, is a picture of my desk, where all the magic happens at work, at least according to the insurance companies. Because this is where I spend as much time documenting on the computer as I do with pts upstairs. You can be Marcus freakin’ Welby, Dr. Quinn Medicine Woman, House, and Doc from ‘Loveboat’ all rolled into one and it doesn’t matter how good you are—not unless it’s in a progress note. It takes a lot of our time. I could go on a very sour rant….but now isn’t the time.

I’ve seen 10 pts today. Normally I’d see 25-30. Waiting room is dead (ok BAD choice of words. Empty. Waiting room is empty.)
It’s eerily slow in every office I’ve talked to. Calm before the storm, I guess. Spending our time streamlining processes, shuffling staff, getting ready. We have cancelled a lot of our routine appts, physicals, etc especially in our highest risk people. Doing a lot of work on the phones. But pretty much everything elective is being postponed, so that leaves a lot of time. It’s weird, man.

Anyway, a few things to go over and update you. There are still no confirmed cases in Cadillac. BUT there are several suspected cases that have been admitted to the hospital. That’s just in the last day or so. But once again, theirs and our hands are tied due to lack of testing. These people have all been tested but it’s taking 4-7 days to get the results back. The earliest tests that were sent are trickling in but all of them are negative so far. But there are lots of them that are still pending and it’s only a matter of time before one of those comes in hot. We Just have to assume they are Covid patients though, since if it walks like a duck, quacks like a duck, looks like a duck—it’s probably a duck. Quack. (ok again maybe a bad choice of words from a doctor).

Latest numbers in the state are 336 confirmed cases, up from 110 yesterday. I think a lot of that is due to tests finally coming in. Remember those were people tested 4-5 days ago. But that increase is now squarely on the exponential curve.

Here is the bottom line—it’s here in Cadillac. So if you were waiting to ‘take this seriously when it got here’, well, you can safely assume it is (though if you’re going to argue with me that I can’t prove that you are correct. And then I will ignore you).
The social distancing thing has been mostly well-heeded around here, whether people wanted to or not. Nothing is open. And It’s still pretty cold. Manufacturing plants are still open though I know some are contemplating closing at least temporarily.
My Facebook posts seem to be spreading beyond Cadillac though and if you’re somewhere where things are still open and people are still milling around together, God help you. Staying apart is the only chance we have at beating this without a major human tragedy unfolding. If you’re in a place like that, do like most of up here and just stay home. Don’t go out for anything that’s not absolutely necessary and wash your hands until they bleed. Even perfectly isolating, we are still going to lose people and in some places it’s going to get really bad because people there are simply ignoring the warnings. It’s like watching children play in traffic and not being able to do anything about it.

I’ve been asked by a lot of people about whether or not I think they should go south for spring break. What do you think I’m going to tell you. How ‘bout—you’re nuts. I’m Not going to guilt-shame you or talk about social responsibility. You’ll get plenty of that. I just think you’re nuts. Just my opinion. Who knows what the medical situation is going to be where you go, especially in a week.
I’d really sit down and ask yourself if it’s worth it. I’m supposed to go to Mexico Sunday with my family. I haven’t had a vacation since August. I’m pretty fried. Was reallllly looking forward to it. And It totally and completely sucks that we are not. But….it’s not worth it.

Damn this post is long. I’ve still got stuff to talk about. Sorry.
Take a break. Go get a glass of water.

Ok. Our Fearless Leader today started going on about chloroquine and hydroxychloroquine as possible treatments. You’re going to read a lot about them. The first one is a malaria drug we don’t use very much because of the fact that in many parts of the world malaria is resistant to it. It’s been around a long time.
The second is a drug also originally used for malaria but also mostly used now for disease modulation and immune system suppression in people with autoimmune diseases, things like rheumatoid arthritis. I’ve never used it for prevention of malaria. Lots of potential side effects and much better options available for preventing that. It requires frequent blood monitoring as it can do some nasty stuff.
These drugs MIGHT have some effect on reducing viral load in people who have the virus. But those studies showing this are really small. Just a few dozen people.
And these are drugs that would NOT be cures. And they are not prophylactic drugs, meaning they are unlikely to stop you from getting it. If you call here asking for them we aren’t going to send it in for you.
First off, these are not commonly used meds. There are not 55 gallon drums of these sitting around Walgreens. Secondly waaaaayyy more research needs to be done before we’d subject people to these. I could see bigger studies being done quickly to validate the results and these could be then maybe be given to minimally sick people with confirmed Covid on quarantine to reduce potential viral transmission.
But that’s a ways off. There will be more about these coming out. Talk about ‘off label’ use—there is just not much we can do but wait to hear about it from the CDC.

There are also other some antiviral IV drug combos that are showing promise in India that could potentially be used in the ICUs. These look like they might work too but again that’s for the sickest of the sick and these drugs may not even be available here. I read about them and said ‘huh. Never heard of that stuff.’
There may be some ICUs that will try them though if they can get their hands on them though.

Finally some of my nurses were talking about reading about blood type as it relates to the infection—That Some blood types make it easier to fight off, others more susceptible.
My answer to that —-🐴💩. I don’t believe that for one second. Virus don’t care.

Your hospital here is already dealing with it the best they can. Mobilizing every resource. It’s like waiting for a slow moving tornado. But it’s here now so just do your part by isolating and not getting it or spreading it.

Ok. That’s long enough. Go eat dinner. Maybe Get take out from a local restaurant. Take a walk. Get away from the phone the rest of the night. It’ll be there in the morning and nothing you do between now and then will make much of a difference by stressing out about it—just please please please stay home as much as you can.