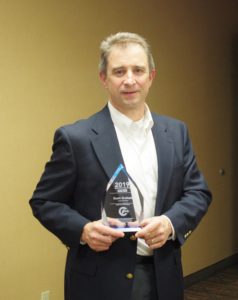 This award recognizes an individual or a Team, who has gone ABOVE AND BEYOND in their effort to support ‘Excellence in providing Recreational Opportunities to our visitors’, supporting the mission of the Cadillac Area Visitors Bureau through continuous involvement and leadership, and has made a significant impact in their field of recreation excellence. This is a life-time achievement award for those with true driving passion for their selected recreational sport. This award winner joins the ranks of Allan Green, Avid Snowmobiler (2015), Dave Foley, Avid Silent Sports Enthusiast (2016), Steve Knaisel, Fishing Advocate and Guru (2017), and Ski/ Snowboarding Advocates Tim Meyer Sr. and Jack Meyer.

Originally from the Flint area, a lifelong hockey player and advocate for youth hockey.  Scott played from an early age, played in Junior and College Hockey.  Early in his Career through the 90’s for 2 years he was the Director of Hockey programs for the community of Dickinson, North Dakota;  Youth Hockey Coach in Fargo, North Dakota; Assistant College Hockey Coach at the then called North Dakota State University.  In 1998 he moved to Cadillac where he became the Cadillac High School Hockey Coach and was instrumental in the growth and success of the youth hockey here.   He has Coached youth hockey for Cadillac Area Hockey Association for many years, and is a youth hockey skills coach around the State of Michigan.  He has been a coach at the MHSAA Excellence Camp; Coaches and directs Hockey “dry land” Skills camp for kids in June for the past 20 years.  Instituted the ‘Learn to Skate’ Program in Cadillac and has been a Board Member of CAHA for several years.  With ample passion he has been Instrumental in creating and promoting state wide the ‘Hockey Night’ in Cadillac, which are tournaments for youth players, bringing multiple teams and their families to Cadillac for a long weekend of competition for the past 13+ years.  Scott has been an advocate for youth sports, and is one of the many leaders contributing to the success of The Wex Ice Arena here in Cadillac. So happy to welcome our 4th winner of the Allan Green Memorial Recreation Excellence Award.