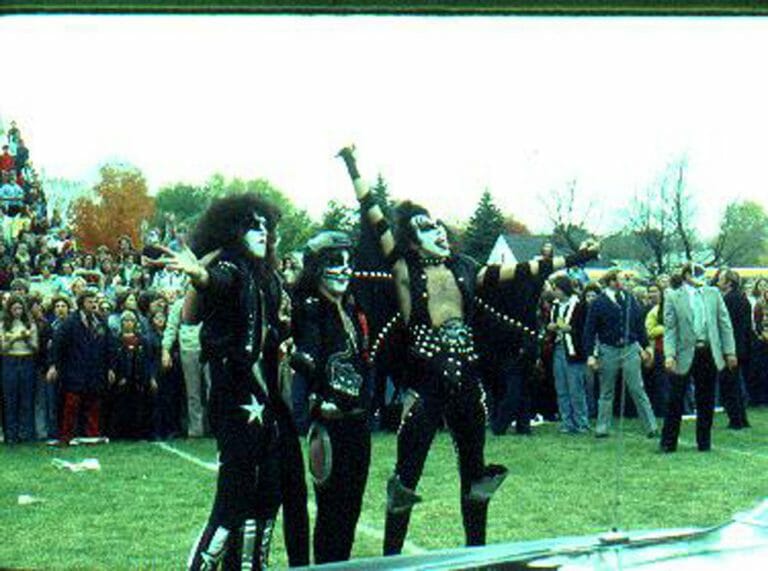 In 1973 the Cadillac High School Vikings football team finished undefeated with a perfect 9-0 record. Spirits were soaring as the 1974 season began, but the Vikings lost the first two games of the season. We coaches knew that the team was talented, but we also knew that the pressure of living up to the accomplishments of the previous year were causing the team to play below their abilities. We were looking for something to lighten the atmosphere and playing Rock and Roll in the locker room before practices and games was suggested. As the resident Rock and Roll expert, head coach Dave Brines gave me the task of picking the music. I chose a new and outrageous band — KISS. They were wild, bold, and loud. Plus, their name invoked an old football credo — Keep It Simple Stupid. It was a match that was meant to be.

The 1974 team won its final seven games with KISS as an inspiration. The band heard about what we were doing and instantly adopted the Vikings as their team. Then in October of 1975 the unbelievable happened, KISS came to Cadillac High School and played a homecoming concert in the high school gym. It’s an event that has become a cornerstone of KISStory and a legendary event in Rock and Roll. The story has persevered throughout the years.

Fresh off the 40th anniversary of when Cadillac was KISSed we take time to reflect on what that event meant to the city so many years ago. As that October weekend approached this past year, community leaders, school officials and super fans began to come out in droves to relive what was possibly the most famous moment in Cadillac’s 20th century history.  The build up was months in the making, and the 40th anniversary celebration was getting international attention.  Gene Simmons and  Paul Stanley were both giving interviews and even though they could not physically be here for the event, they were very much apart of the celebration.

The highlight of the weekend was the unveiling of the 10’ tall, nearly 5,000 pound granite monument at the south end of the Cadillac High School football field.  Jim Neff, the man that wrote to the band in 1974, was there to dedicate the monument as well as Head Football Coach Milo Brines.  The KISS monument is the starting point for the “Cadillac KISStory Tour” which is a multi site self-guided tour throughout the city, visiting the iconic locations that were apart of the 1975 homecoming event.  The self-guided tour can be found here and also available at the Cadillac Visitors Bureau (in print-form) or online via the 2016 Travel Guide.

It looked like a scene from a science-fiction movie at the Cadillac High School homecoming bonfire last night; hundreds of young faces painted up like worshipers of some alien race about to descend in their midst.
But it was just part of the KISS mania that rock and rolled into town earlier in the day.

Towering in platform boots and wearing second skins of black leather, the four members of the heavy metal rock band KISS arrived at the high school in the afternoon to a tumultuous welcome from students massed on the lawn. The group had made a brief stop for pictures at the Cadillac Fire Department, pointing up their use of smoke and flames in their stage show, which made them a few minutes late and the crowd that much more expectant. Wading through students masked rock stars entered the gymnasium for more photos and then were escorted to a classroom for view a film, made by several members of the football team, that mimed the KISS show.

The next stop was the band rehearsal room for questions from the players and cheerleaders, as photographers continued snapping away. Then on to the football field for more photos with the team and the marching band, which has learned several KISS tunes for the occasion.

Through all this, a small sea of whitened faces with black eyes followed the group as closely as possible’ reporters and photographers squeezed through the crowd.

Evening festivities began with the bonfire, though no one would light it until Gene Simmons, KISS bass player, showed up to display his fire-breathing talent. Then it was time to burn the effigy of a Chippewa Hills Warrior and head for the gym and the main event; KISS in concert.

The crowd moved steadily in, the faces of parents standing out for their lack of decorations. Sound and lighting equipment filled the stage and to either side of it stood more speakers. The students greeted Double Yellow Line, the warm-up band, with mixed reactions, a few yelling for KISS to come out. But they soon got in the mood when the band played several hard rockers.

During the break between acts, the crowd stretched in what little room they had, the tension mounting steadily. Once the equipment for KISS was set, the audience began shouting and clapping with every check of the lights or movement of ta stagehand.

Suddenly the light went out, and it was time. KISS popped onto the stage and a roar went up brom blackened lips. Giving their blessing to Cadillac and the Vikings, KISS started pounding out their hits. It was a fast-paced show, having a strict time limit from school officials to meet.

There were flames, flashes and smoke to go with the colored lighting. The din was incredible as wild cheering mixed with raucous guitars and drums. There was a short break as KISS and representatives of the school exchanged commemorative plaques.

After several brief retreats from stage near the end, promoting the call for encores, KISS came back to do the song students had been chanting all day, “I just want to rock and roll al night, and party every day.”

As the gym filled with the chorus, foam snow came billowing down from above the band. While the final chords were still echoing loudly in everyone’s ears, KISS was gone and the lights came up to reveal a tired and somewhat-dazed audience. There was still school today to get to get some sleep for, though, for many, th

e excitement probably made it difficult.

Today, the band was expected to participate in the homecoming parade before departing Cadillac for the rest of their national tour. But they won’t soon be forgotten by CHS and the students that wildly welcomed them to Cadillac.

AN EPIC SEND OFF

As homecoming day was in full swing, KISS highlighted the overwhelmingly KISS-themed homecoming day parade. Floats and people began pouring into the CHS stadium, and everyone began to wonder just how KISS would say goodbye. They didn’t disappoint, as in the distant sky, a helicopter approached. As it got closer, the crowd erupted as KISS boarded for an epic send off, dropping thousands of leaflets on the fans below. It is a day that no one present has forgotten and is frequently talked about to this day.