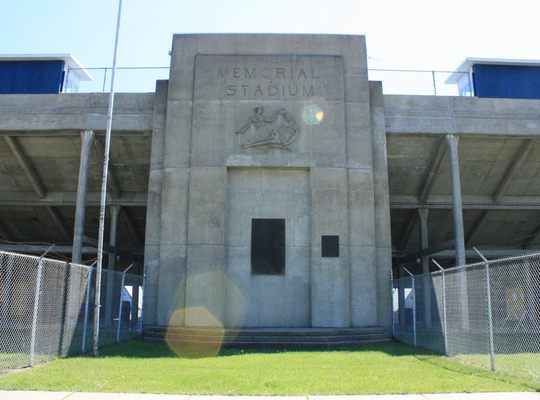 Description:
The football stadium was built in 1956, and it was considered one of the best stadiums in the country.The stadium was used for the first time on Oct. 19,1956, when 3,300 joyous Viking fans filled it to capacity. But four years later, on Nov. 11, 1960, a more somber ceremony took place. On that date, the stadium was dedicated to the memory of Wexford County’s war dead.

Lest we forget, Veterans Memorial Stadium was constructed as living memorial to the Wexford County men who gave their lives in our nation’s wars.

At the end of World War II, returning war veterans of American Legion Post 94 began discussing the importance of building a memorial for those who didn’t come home. In 1952, it was decided that a living memorial should be built in honor of all Wexford County soldiers who died during World War I, World War II and the Korean conflict.

That memorial wouldn’t be a statue in the park. It would be a stadium for the new Cadillac High School.

Although the stadium opened for sporting events in 1956, the dedication of the stadium as a living memorial to our war dead didn’t take place until Nov. 11, 1960.

At the entrance to the stadium, on a large concrete column, an engraved roll of honor lists the names of men who made the supreme sacrifice for our country; 27 men were killed in WWI; 95 in WWII, and nine in Korea.

An additional plaque was added in 1982 to honor the lives of 11 area men killed in Vietnam.

Info brought to you by the Cadillac News.  For full article click here.