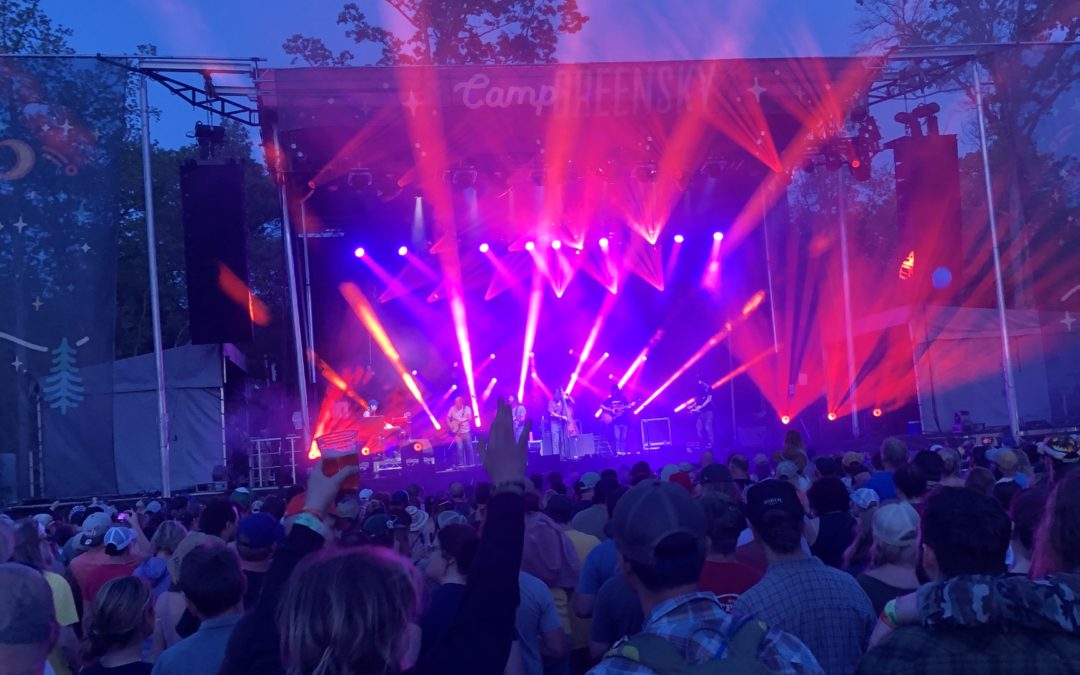 Twenty-five miles west of downtown Cadillac sits a quaint plot of land that, to the unfamiliar eye, appears to just be an open field. Little do they know that 2,000 some people flock from across the country to experience lovely bluegrass music.

This Hoxeyville field is home to two different music festivals a year – one being the Hoxeyville Music Festival, and the other being Camp Greensky. I had the pleasure of attending the second annual Camp Greensky on June 6th, 7th, and 8th, 2019. In my opinion, Camp Greensky is a more commercialized version of Hoxeyville. With that being said, both festivals are extremely inclusive and give off a homey, non-judgmental vibe. 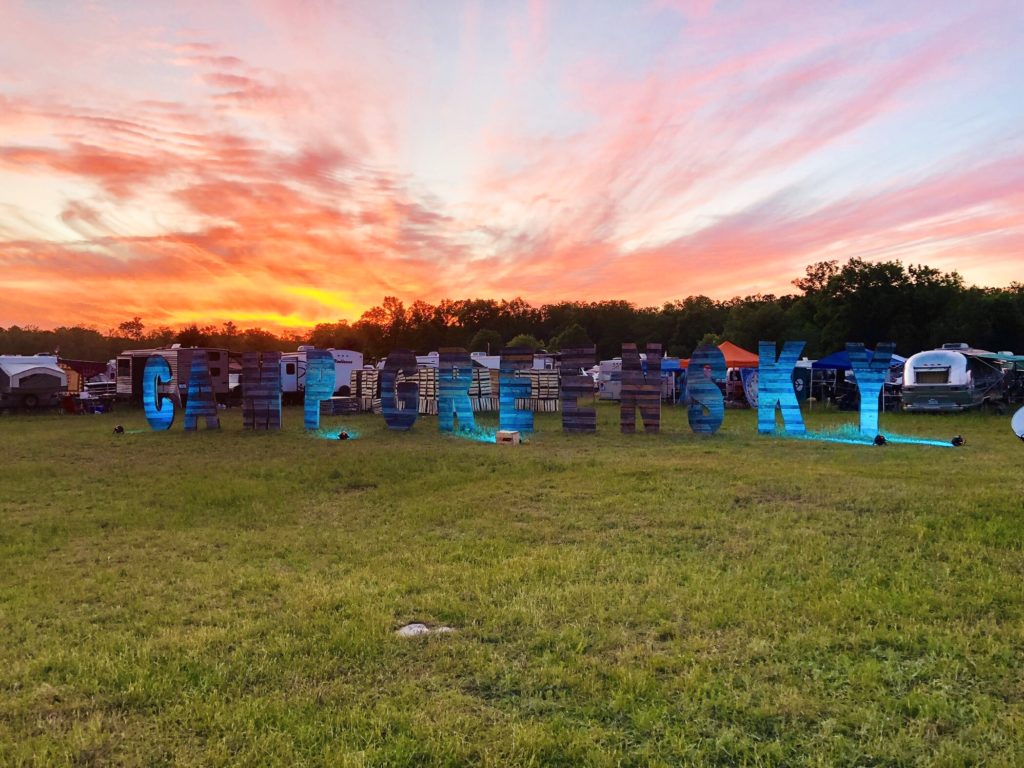 Camp Greensky is put on by the band “Greensky Bluegrass” out of Kalamazoo, Michigan. Members include Anders Beck [dobro], Michael Arlen Bont [banjo], Dave Bruzza [guitar], Mike Devol [upright bass], and Paul Hoffman [Mandolin]. Their music embodies an ironclad creative bond, familial brotherhood, and a lifelong commitment to fans. At this point, it goes without saying the band means everything (and more) to the Kalamazoo, MI bluegrass mavericks. 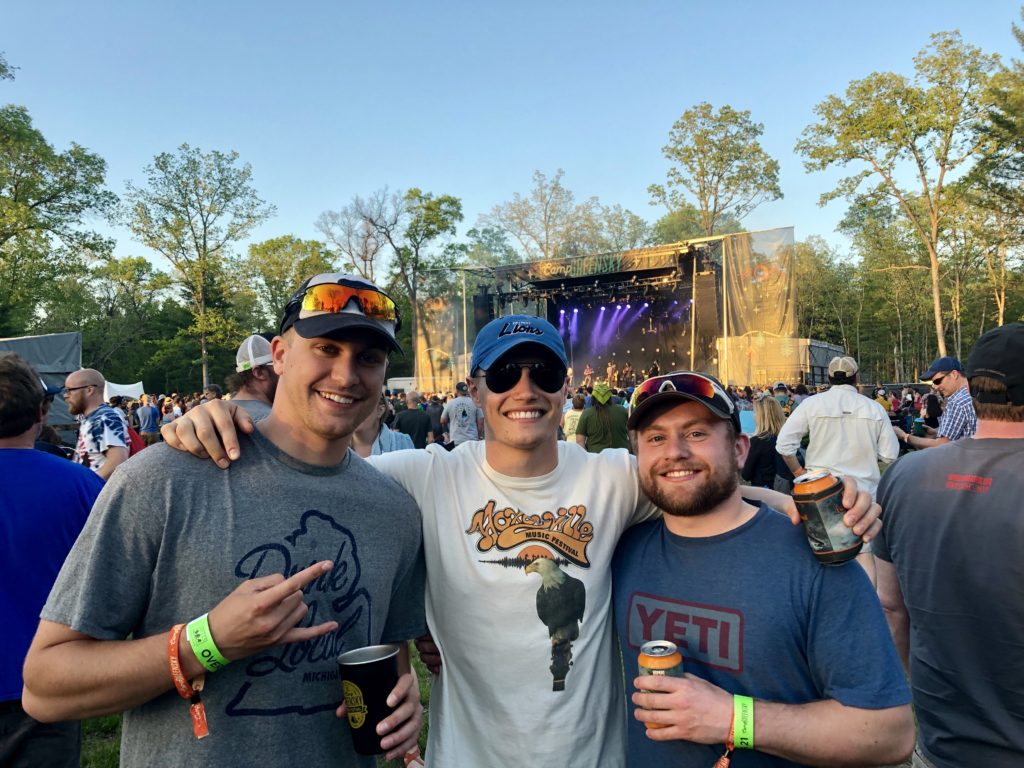 Lewis Finch, Ethan Myers, and myself in front of the main stage

Beer lovers rejoice at Camp Greensky as some of Michigan’s very best beer is supplied. Also based out of Kalamazoo, Michigan is Bell’s Brewery. Bell’s supplies all of the beer within the main stage venue. Fans indulged on Bell’s very own Lager, Oberon, Official Hazy IPA, fan favorite and America’s Home Brewers number one beer Two-Hearted Ale. Also available was the once a year, brewed specifically for Camp Greensky – Bell’s All Four Ale, a mix between an IPA and American Pale Ale. Non-beer drinkers were still able to stay hydrated with Bloody Mary’s, Brown Derby’s, Deep Daly’s, margarita’s, Ruby Mule’s and also various non-alcoholic beverages. 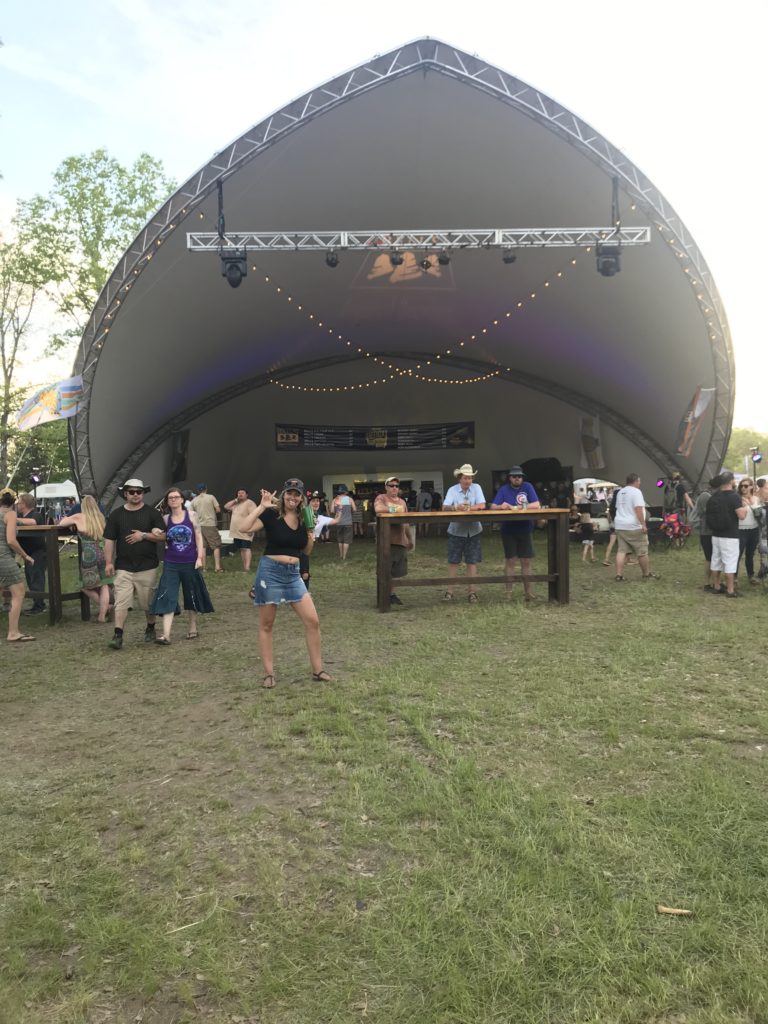 Lauren Munch in front of the Bell’s Beer Tent

The music was amazing per usual. Some of my favorites included Bob Marley’s son Stephen Marley, Rachel, Dominic and Joshua Davis accompanied by Lindsay Lou, Billy Strings and of course Camp Greensky’s own Greensky Bluegrass.

Joshua Davis placed third on NBC’s hit show “The Voice” in May of 2015. I have listened to him for a couple of years now, and it’s always a pleasure to see him live. The stage that he shared with Rachel and Dominic Davis, as well as Lindsay Lou, is the mainstage at Hoxeyville. The stage is a gorgeous wooden masterpiece that gives off a very intimate vibe. There weren’t too many people at this show either, so it kind of felt like I was getting a personal show.

Stephen Marley put on a heck of a show and is an incredibly talented singer, drummer, and overall musician. I made my way up near the front and was so impressed with him and his band’s ability to take control of the crowd. He had an uncanny resemblance to his late father but still had his own distinctive style and sound. He played a cover of his dad’s “Three Little Birds”, which if I closed my eyes I would not have known the difference between Stephen and his father. The festival site is largely known for hosting bluegrass and folk music, so for Camp Greensky to venture into reggae music was a bit of a jump. Luckily for them, Stephen was able to completely encapsulate the audience. Throughout the rest of the weekend, I heard people say their favorite set was Stephen’s, and I have to say I agree. 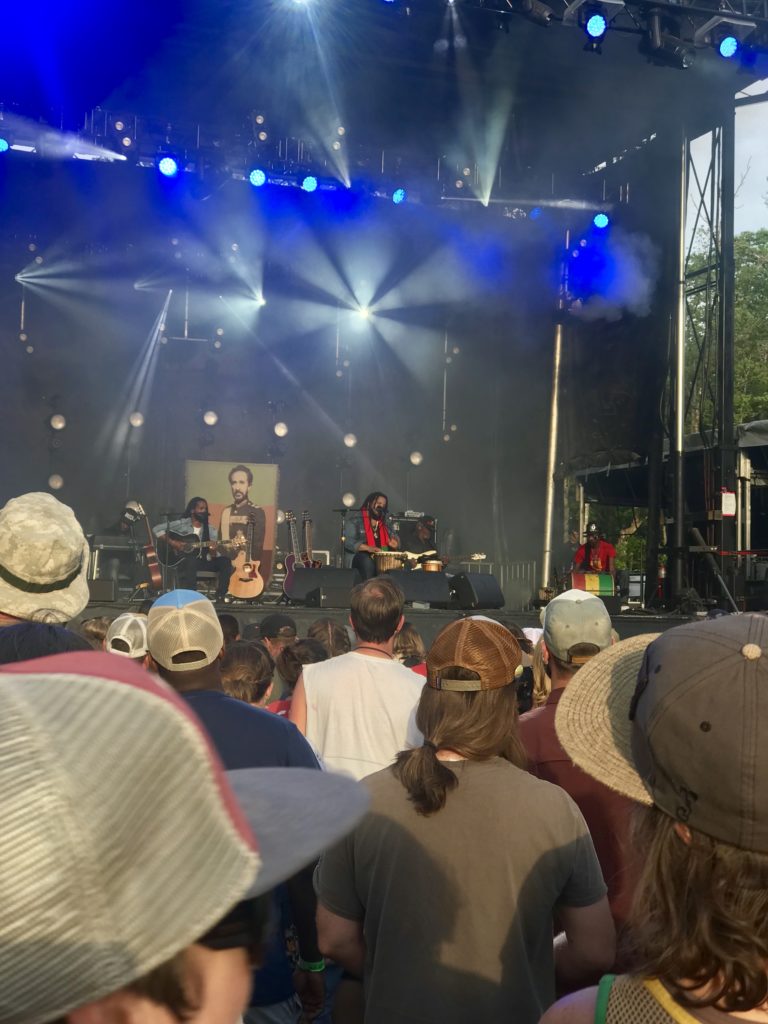 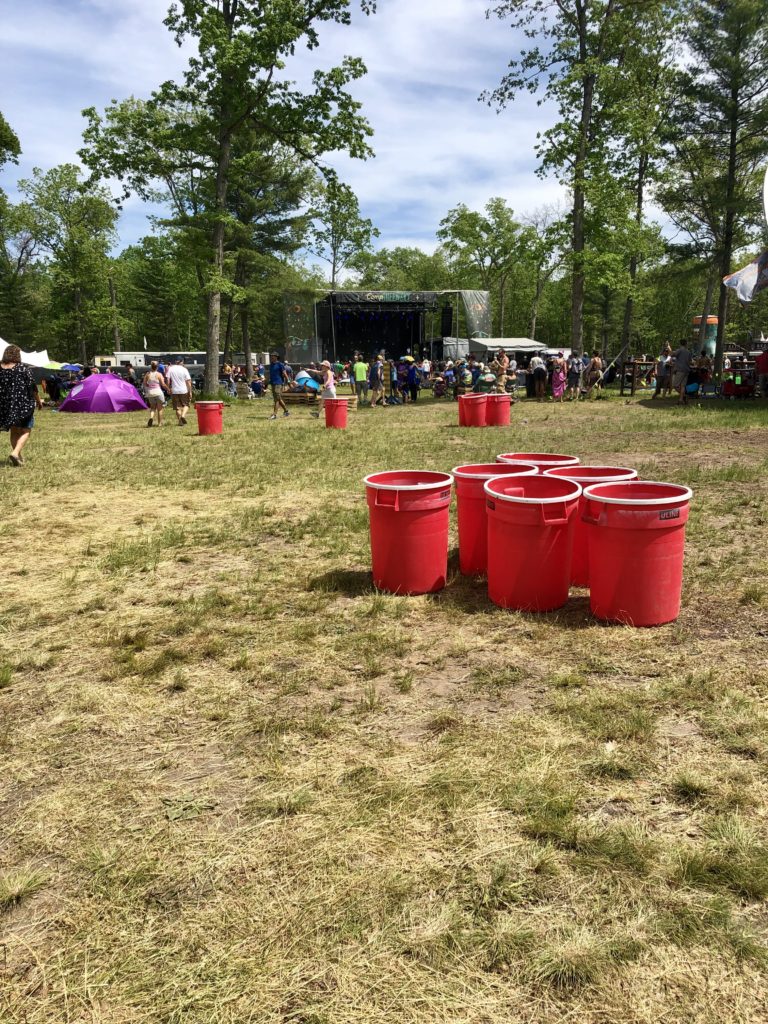 To keep yourself busy between sets there are numerous things to do. One of my favorites was giant beer pong. The 6 trash cans in the image above are placed in a triangular formation and two volleyballs are thrown back and forth with the objective of making the ball into the trash cans. When a cup (or trash can in this case) is made, the cup is pulled off to the side. When all 6 cups are made, the game is over. My brother and I enjoyed a game where he had made 5 cups to my 1. He struggled to make his last cup while I made my remaining 4. It was tied 1-1 when he finally drained his last cup for the win. Regardless of the outcome, he and I both enjoyed ourselves!

Another favorite festival activity of mine is walking around and shopping at the different vendors. I purchased an official Camp Greensky t-shirt. Among official merchandise by the festival itself and the artists, there is plenty of tye-dye clothing, jewelry, henna tattoos, clay mugs, photographs, and just about every other art and clothing apparel you can think of. The food at Camp Greensky was also incredible. I had a gyro with fries, loaded nachos with cheese, rice, tacos, salsa, lettuce, and pulled pork, and then tasted a mixed fruit smoothie, a burger, and every item was just as delicious as the last. 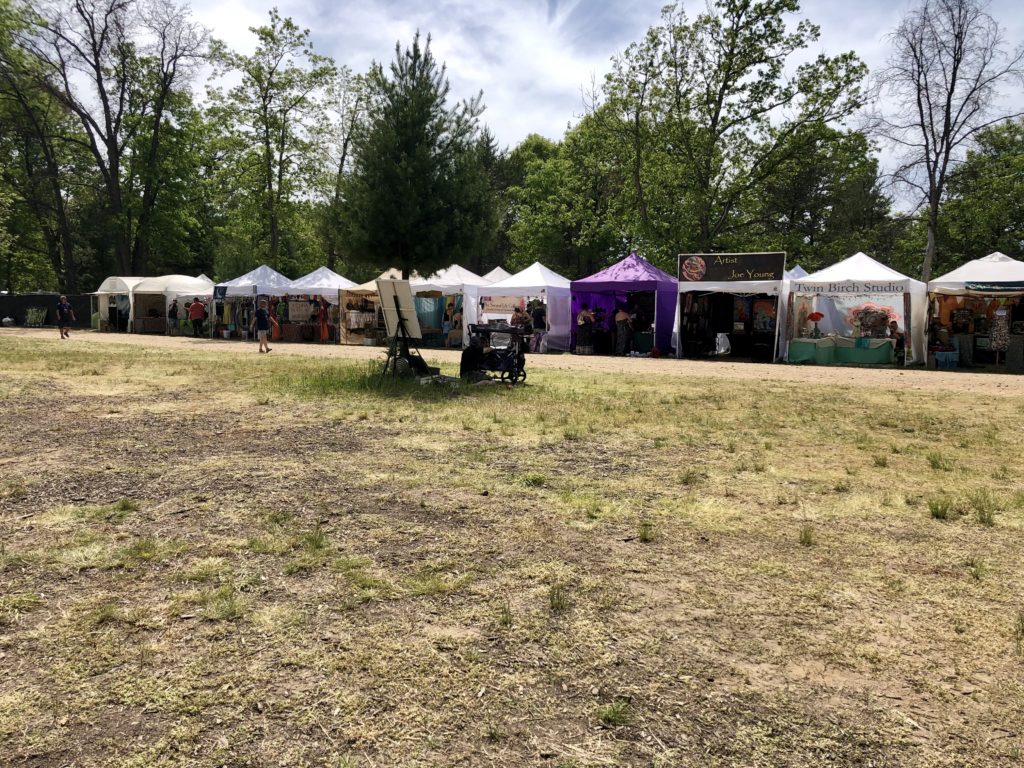 While I’m not much of a yogi myself, I can definitely appreciate those who are. Camp Greensky had three different yoga instructors for each of the three days of the festival. Kelsey Foster, LeAnne Devol, and Katy Joe led yoga sessions with separate goals in mind: such as empowerment, physical and energetic alignment, and chakra balancing. It looked like it was a pretty good turnout too, with about 50 or so people turning up for the 9:30 a.m. Saturday session. 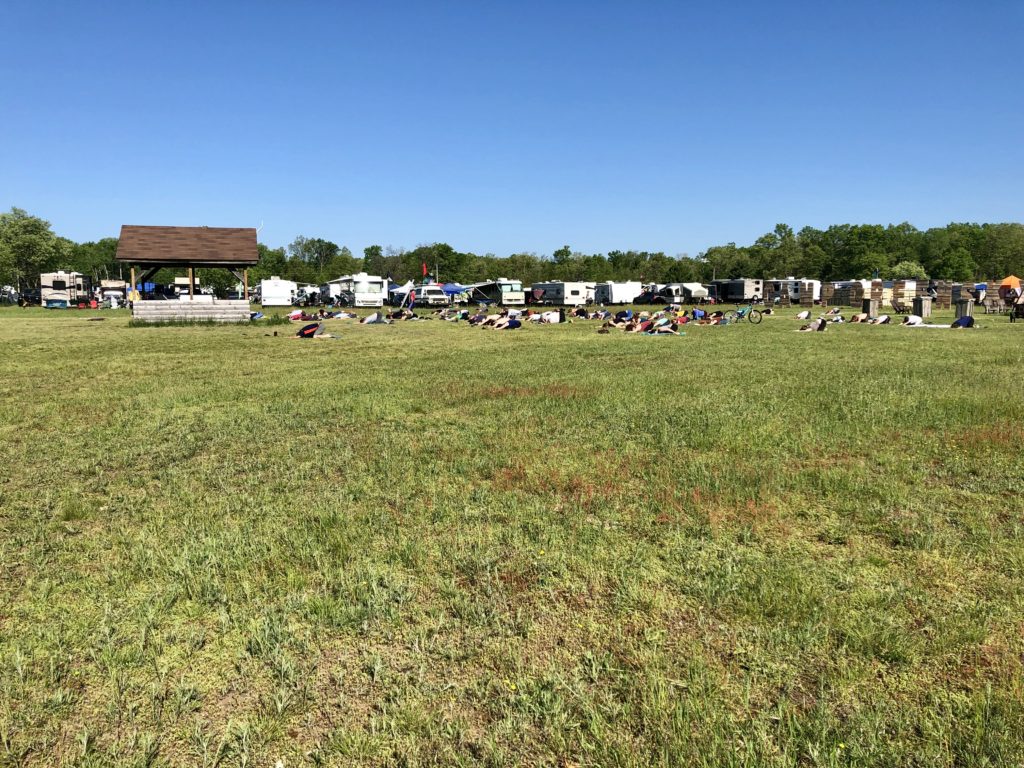 Camp Greensky has officially noted that the festival is an “annual thing”, so stay tuned for what 2020 has to offer! Visit their Facebook at https://www.facebook.com/campgreensky/ or their website https://www.campgreensky.com/ to keep updated!

See more photos I took of the weekend below