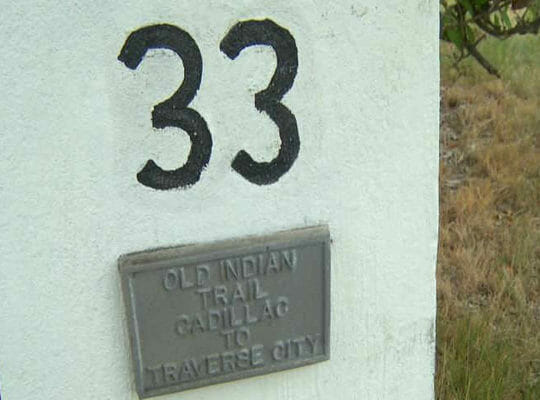 For several centuries, Odawa people have been on these shores and in the woods and hills of this land. We are living amid the places from which spring the stories of our world, ourselves, our families and our tribal nation. The original tribal trails throughout Michigan are a walk through history.

Sometime in the 1200s, the Anishnaabe people started using this trail, which soon formed into the Three Fires, consisting of the Ojibwe, Odawa and Potawatomi Tribes.  Some records show the possibility of the Cadillac-Traverse City Old Indian Trail beginning as early as 700 BC.  The Hopewell civilization (also called Adena in some regions) is a prehistoric culture of the American middle-west.  Experts have found evidence of this prehistoric culture dating back to 600 BC.  Large shaped burial mounds and extensive trade networks are characteristics of this ancient civilization.  Areas around Cadillac illustrate evidence of these burial mounds.  Many exist at or around the Cadillac Country Club.

DOWNLOAD: Get your own printable Old Indian Trail Map!

We know that Indians belonging to The People of the Three Fires used the area between Upper Clam Lake (Lake Mitchell) and Lower Clam Lake (Lake Cadillac) establishing campsites for hundreds of years. Aging relics found in the burial mounds shows that establishment of the trails in the area may go back well before either recorded or oral histories. Might there possibly have been a Hopewell village established here in the mystic past?

Throughout the past, stories like this have captivated the minds of many history buffs and the first modern mappings of this trail system started to get pieced together by Milo Petoskey Crosby.  Upon his arrival to Wexford County in the late 1800s he was captivated by the trail, so much, that upon his retirement (in the early-mid 1900s) he began to mark the trail.  He spent years walking the trails based on fragmented historical documents, finding the remnants of the Old Indian Trail.  During the 1940s he placed 14 stone markers, which started on Lake Mitchell and ended at the Manistee River near Sherman.

After the original 14 markers were placed, the trail was visited by a select few historians and people with ancestral ties to the trail.  This went on for years until James Comp and Ed Babcock, historian and retired Cadillac High School teacher continued the work that Crosby started.  Comp and Babcock worked to map and place the next 5 markers.

The entire trail is composed of 33 markers total and 32 of them are placed alongside roads so that the vast majority of the trail can be driven. Hiking the trail is not advised as most of the trail crosses private property. For more information on the trail, please contact the Wexford County Historical Society.  Those interested in adopting a marker may do so online at : www.oldindiantrail.weebly.com