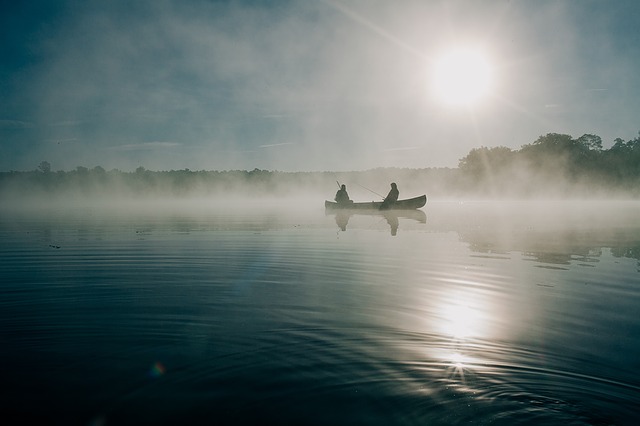 Some years the ice lingers through the middle of April. This winter has had so many highs and lows, it’s any ones guess as to how long it will last. Lakes Cadillac and Mitchell appear empty since the permanent shanties have to be removed by midnight on March 15th Don’t let this fool you though, ice fishing is NOT over, some of the biggest fish are iced just before Pike and Walleye seasons close on March 15th.   So if you’re planning on fishing Lakes Cadillac and Mitchell in March, make sure to bring your power auger, just in case, and watch the Geese and Ducks for open water available.

Cadillac anglers LOVE Pike –and take BIG PIKE! Lakes Cadillac and Mitchell have a reputation for trophy size Pike and credible Walleye catches since the MDNR’s stocking program began. Best place to start is the west side of Mitchell, outside the coves. The larger quantities of fish taken in March come off Lake Mitchell, while fewer but often larger are caught on Lake Cadillac. So pick your size and fish.

Panfish catches usually pick up during the dark, gray days of March, which have always been better than the bright ones for fishing. Crappie dominate the lakes but anglers often limit out on mixed catches of Crappie, Gills and maybe a few Perch. Tiny jigs tipped with spikes or wax worms are deadly. This season we have measured several Crappie over 14 inches, while most catches are in the 8-10 inch range. As it warms and the spring rains begin, the lakes surface gets slushy and the melting snow and ice drains down the old open fishing holes, for a short time we experience some of the best Crappie fishing of the year. The whirlpools in the holes must aerate the lakes which bring schools of Crappie to the surface.

Regardless of the depth you’re fishing, the Crappie suspend in the top 3 feet. The trick is not to spook them. Often as you catch one, others will follow it up the hole. It’s a frenzy. The conditions don’t last long though, only while the old fishing holes drain before the ice goes away.